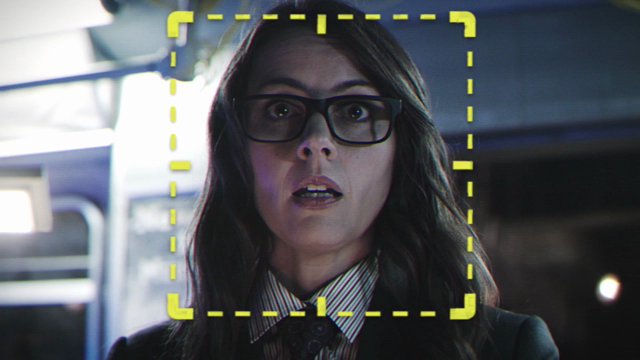 – Reese suddenly showing up behind  or calling Fusco and saying “Hello Lionel” in a creepy voice.

– Reese being a creep in general, showing up in the back seat of people’s cars, and other such creep-like behaviours. Creepy Reese is more of an early series phenomenon.

– Shaw is eating something.

– Root says “I wasn’t talking to you”. Trope referenced for tragic results in “The Day The World Went Away”.

– Fusco is taken somewhere by some smug goon at gun point, is relentlessly mocked by said goon, then turns the tables on and kills him.

– Carter complains about the amount of laws Team Machine is breaking.

– Finch points out the obvious in a very shocked voice.

– Reese quips about previously normal seeming number turning out to be not so normal. “Looks like Mr. Jefferson is delivering more than just mail in his route” is the kind of thing he’d totally say on this show.

– Finch contemplates if building the Machine was the right thing to do.

– Root reassuring Finch that building the Machine was in fact the right thing to do.

– Shaw rolling her eyes at something stupid or Root’s pick-up lines (the fact that she genuinely smiles at the last one Root gives her in “The Day the World Went Away” kills me).

– A single blow to the head knocks a henchman out cold instead of giving him brain damage.

– A member of Team Machine tapping the area around their ear and talking to another specific member of the team over the phone as if the ear pieces they definitely aren’t wearing can be used to psychically communicate with anyone at any time.

– Greer has a person he’s made a transaction with killed. Either he shoots them, or they get bagged by his goones.  It’s funny regardless.

– Someone pointing out that Reese isn’t a real detective, or doesn’t act like a real cop.

– Reese is sad about the darkness in him that won’t let him form connections with people.

– Reese realizes that darkness can be overcome if he sticks with his friends and finds new reasons to live through them.

– Reese once again realizes that darkness will forever keep him alone.

– Someone points out that Shaw is a sociopath.

– Shaw is shown to actually feel emotions, but just really deep down (something I like to call clinical Tsundere-ism).

– Someone making a startling discovery about a number right before the commercial break.

And that’s all I got for now. I’ll probably update this as more come to mind, but these are the recurring elements of this show that stick out the most to me. This isn’t meant as a critique of the show itself, but more of a celebration of all the aspects that makes Person of Interest what it is before it ends. I look forward to seeing the finale in just a few days…!