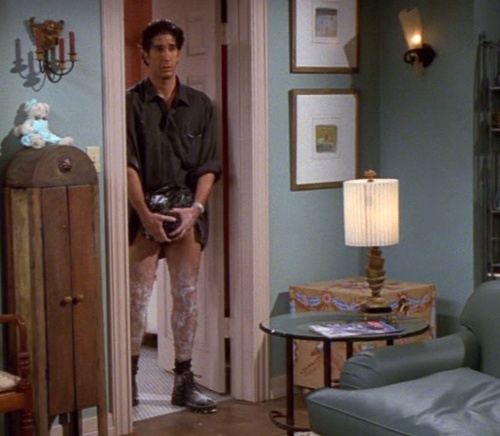 It’s no secret that I am a pretty big Friends fan. Yes the show can be hokey, cheesy, and dumb sometimes. Yes the later seasons definitely looked to creak along with age a bit. But you know what? Screw anyone who tries to say this was an awful show. Friends changed sitcoms in a way that few sit-coms did before it. Friends was the show that identified the true strength of comedy, and that is the chemistry between the cast and the strength of the characters.  You can pair any of the 6 main cast members together and wring a story out of them consistently. Even now, over 10 years after the show ended and 20 years after it premiered, that is still really damn impressive. So I’m sure you’re all curious and waiting patiently to find out who I think is the best character in this dynamite cast that helped shape the landscape of sit-com history. And without question, the answer to that is Ross, but also know that if you were to ask me who I think is the worst friend the answer would be the same. Ross, just Ross.

Ross between episodes was basically whatever the writers needed him to be to draw laughs. He was like the sitcom character equivalent of a mercenary, assuming numerous roles to accomplish certain tasks, never having one linear flow. Whether the writers needed him to be the voice of reason, the clueless idiot who can’t pick up social cues, the obnoxious intellectual, the hopeless romantic, the perverted narcissist, and even the bona-fide psychopath of the cast, Ross was always game. And it was all convincing. We can all see Ross doing all these things, assuming all these different roles because he was just that kind of guy. The same man who would try and raise a pet monkey is still believable as the guy in the group that teaches a university class.

All of Ross’ roles aren’t all that likable however. At times he goes into uncomfortably dark places. The moment when he gleefully reveals to Phoebe that he didn’t get his annulment after he and Rachel drunkenly got married in Vegas despite telling her he did comes to mind in this case. And let us not forget what he became by the end of the “Unagi” episode. But there was a time where he found that perfect blend of pathetic desperation where it was just dark enough to keep you interested but also funny enough to make you forget about all the implications involved with the scenario. I am of course talking about the infamous “Denise Richards” episode. I will not go into further detail, that episode deserves its own article post.

Quote of the day:

“This is ancient Earth’s most foolish program. Why does Ross, the largest friend, not simply eat the other five?”