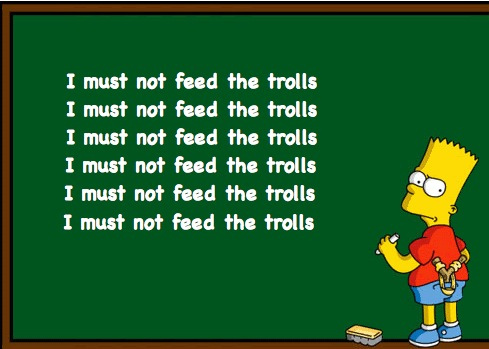 Spotting a troll is often difficult for people to do these days. Not because most trolls are skilled at concealing their identities, it’s more that people stopped being able to differentiate “troll” from “person I disagree with”. The general routine now is that there is some sort of consensus for a specific topic on a discussion board until someone comes in with a differing view, and that person is subsequently hit with inane and mindless troll accusations that now come in the form of the phrase “gr8 b8 m8 i r8 8/8”. This is a problem because now that the term “troll” can refer to essentially anyone, the phrase has lost all power and the once important task of troll slaying has become far more difficult. I’m here to try and clear it all up.

Let’s start with what a defines a troll. A troll is an individual who goes on the internet, spouts out some ridiculous rhetoric, and does it explicitly for the purpose of agitating others. That last part is important because it is the difference between a troll and an ignorant person who just doesn’t know any better. A large part of being a successful troll comes down to acting ability. If a troll is any good, the first thing it’ll think about is “Can I sell this story?”. Thankfully, most trolls are really bad at what they do and are incredibly obvious. To show why, let me list things that trolls aren’t.

– Trolls aren’t people who have different opinions than you. If someone says they saw Avengers and thought it sucked, that’s his or her’s opinion. It does not make them a troll.

– Trolls aren’t people who are ignorant of something. If a troll does not know what “X” incredibly famous thing is, it’s possible that they just do not know.

– Trolls are not people with incredibly backwards ways of thinking. If someone says “these days, I feel like white people are more discriminated against because of things like affirmative action”, they aren’t a troll, they are just very wrong headed about a certain issue.

A troll can be spotted based these things:

– As I stated in another post, if someone asks an incredibly inflammatory question behind a veil of feigned childlike innocence, that person is a troll.

– If someone embodies an internet stereotype completely, they are a troll. For example, “feminists” sporting avatars of overweight woman who post things like “all men should be castrated for even THINKING of doing this”, are not actually feminists, they are trolls preying on what some people on the internet think feminists are like. They are essentially becoming a strawman to serve their trolling purposes, which make these trolls one of the most destructive.

– Anyone who doesn’t respond at all, or responds way too frequently to their inflammatory topic is a troll. For example, if someone posts an incredibly controversial thread somewhere and makes zero attempt to defend it or is overzealous to the point of being disingenuous, that person is a troll.

– People using a super jarring double-standard argument are trolls. For example, the guy posting in the Grand Theft Auto discussion asking “Why is it that you can kill women, but you can’t rape them in this game? Isn’t killing worse than rape?” is a troll. He knows the answer to that question, he is just trying to get a rise out of people.

– The most obvious troll of course, is the one that vomits toxic diatribe out about a group of people they supposedly can’t stand. The best way to separate a troll from an actual racist is to note how much thought they put into their rant. Racists like to go in depth, trolls are far more generic in their approach.

– Anyone that continuously urges people to kill themselves over the internet is a troll, but they’re also human waste and potential psychopaths. These are the most extreme types of trolls, and are the kinds that are definitely toxic in real life too. Ignore them at all costs.

This guide is relatively short, but I’m definitely going to be revisiting the topic of trolls when I discuss why they do what they do. Thanks for reading, and remember, don’t feed.

“Everyone hates a message board miscreant, but now you can do something about it! Flame Wars: The Next Generation, tonight on Sick, Sad World!”

3 thoughts on “How to Spot a Troll”