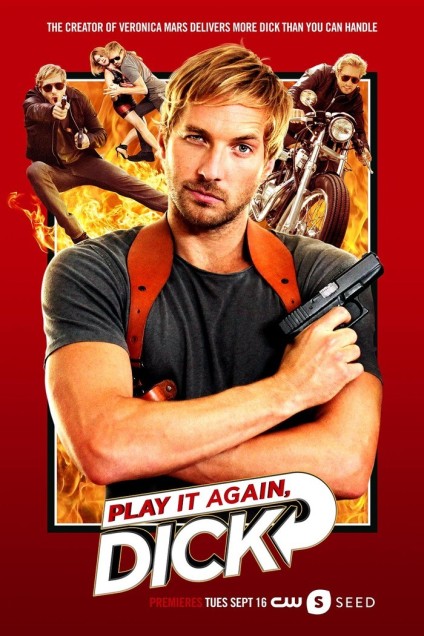 “How do you do it, Dick Casablancas?”

When I first heard of a Dick Casablancas centred Veronica Mars spin-off, I was super excited to see the continued exploration of a world I loved so much; however, I am ashamed to admit I was disappointed upon finding out it was actually a show about Ryan Hansen trying to make a Dick Casablancas show. It’s so odd reviewing this because this is really the first of its kind now that I think about it. Sure there have been other mockumentaries but this show feels like an odd cross between the world of Veronica Mars, the world of a fictionalized Ryan Hansen as he tries create the pilot to his show Private Dick, and some other strange vision of the world of television acting. Before I really delve into this review, I should tell fans of Veronica Mars who have decided against watching it for whatever reason to stop what they’re doing and go see it right now. Seriously, I’d argue that its 8 short episodes are more fulfilling in terms of fanservice than the movie was (which I also loved).

From the moment Kristen Bell and Ryan Hansen discuss the dubious nature of Dick’s placement in Veronica’s life due to his huge role in the worst night of her life (culminating in Kristen Bell acknowledging that the creator Rob Thomas had a “blindspot for Dick”), you’ll feel right at home. Seriously, there is an enormous wealth of meta-humour, surprise guest appearances by actors/characters you wouldn’t expect, and actors poking fun at the strengths and flaws of the series as a whole. This isn’t to say the show has nothing to offer to people who aren’t familiar with Veronica Mars; in fact, if you aren’t concerned about spoilers, this is still a hilarious mockumentary show about wacky fictionalized versions of these actors. It also serves as a parody of 80’s detective shows once it gets around to showing the show within the show, so there’s that too. And if you’re really worried about getting lost, “Logan Echolls” is there to provide viewers with a wealth of (clumsily delivered) exposition. Many of the biggest laughs come from how poorly done Ryan’s show turns out to be, and the awkward exposition should be paid attention to as well as laughed at if you want to keep up with the “story”.

As expected, there is an absolute ton of “Dick” peppered throughout, with Ryan Hansen uttering lines like “Suddenly, pieces have fallen into place: Powers of de-Dick-tion” and my personal favourite: “Casablanca’s first law… Every action has an equal and opposite Dick-action!”, but along with those jokes is writing humour (the type of comedy that writers can instantly recognize and appreciate), off-beat jokes, and Ryan Hansen’s increasingly insistent metaphors and examples about how old Enrico Colantoni is. On top of that, the physical comedy is on point too, with one scene featuring Dick/Ryan filling a shot glass with liquor and then dropping that same glass into a much larger glass full of some alcoholic beverage (clearly, Dick Casablancas doesn’t mess around). There’s a lot more you can say about the humour in this show, but I’ll put it simply by stating this is the type of comedy that throws jokes at you constantly, but with most of them landing due in large part to the stellar cast (with some actors turning out shockingly great comedic performances), and sharp dialogue.

Watch it now (there’s no excuse):