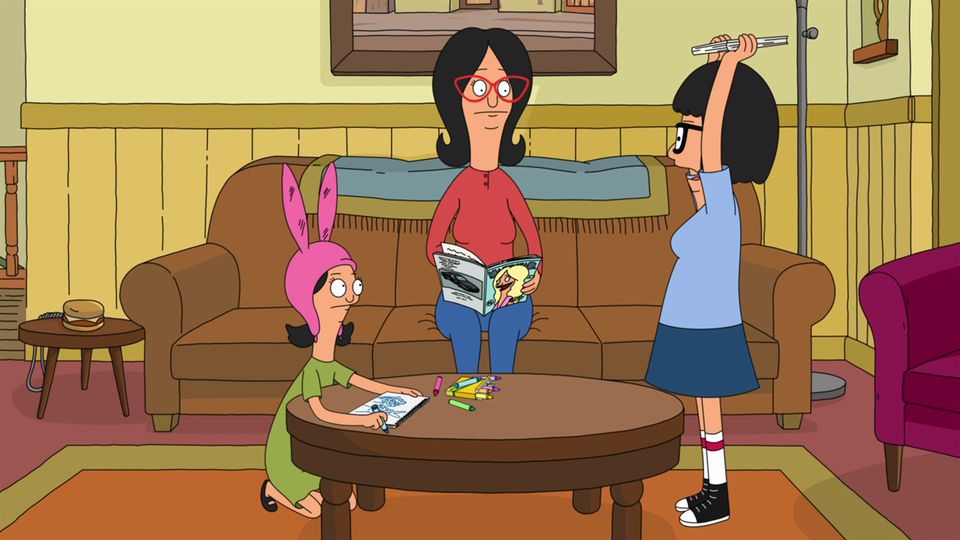 A recent episode of Bob’s Burgers had me thinking about outdated episode premises in TV shows. The saying that writers tend to “write what they know” is true in a lot of ways, and nowhere is that more apparent than with writing children. When they write about the childhoods of their characters, they’re really projecting their own childhoods into their storytelling. That’s why they write about kids who get stuffed in lockers (which happens rarely these days since schools are far more crowded and lockers need to be smaller to fit), that’s why we watch kids actually call each other on their cellphones instead of just texting, and that’s why we see totally implausible plot lines like the one seen on the Bob’s Burgers episode “L’il Hard Dad”.

On this episode, Tina has a book report she didn’t start, and it’s due tomorrow. Panicking, she decides she needs to read the whole thing in one day. Ok, I can’t imagine a teenager today, even one as weird as Tina, resolving to do that, but sure, that’s not too much of a stretch considering her family immediately picks up on the ludicrousness of that undertaking. The problem comes in at what Linda and Louise suggest Tina do, and that is to “back-cover it”, as in to read the back of the book she’s been assigned to get a grasp on it and then winging the presentation with that. They also explain it in tone that suggests it’s the most obvious and basic way of solving such a problem. This solution screams of “something people did before the internet was a thing”, and as idiotic as that sounds, it kind of took me out of the episode a bit. I know Linda and Louise aren’t supposed to be reliable sources of info, and Bob’s Burgers isn’t meant to have plots we take seriously, but the whole time one thought kept running through my head:

Every joke that came from the plot, every elaborate plan, every riff and one-liner and piece of ridiculousness that happened was overshadowed by the constant nagging in my mind that this could all be solved with a quick look on the internet. Keep in mind that this is an age where people in University courses can get A’s in literature courses without reading a single word of the books they were assigned. This all felt similar to one of those plots where a teenage character has to contact another, which leads them to actually get up and physically find them; the viewer actually has to suspend their disbelief to accept the notion that these two grown people don’t have cell phones with them.

It really does feel like we have to research trends and lifestyles of kids and teens these days if we want to write them accurately. That kind of skill didn’t seem like an obvious one to need to me before, but now it’s so clear. Characters in modern settings really should exist in a world with modern appliances. Watching Tina and her family straight up ignore the fact that the internet exists was the equivalent of watching a group of characters trying to solve the riddle of making copies of a single document. It’s just… off.

Note that this isn’t a criticism of the episode as a whole, it was more of a commentary on something I felt was really striking about the whole thing.

*Everything Jason Mantzoukas said on the latest Community episode* – Seriously, it was pure gold.