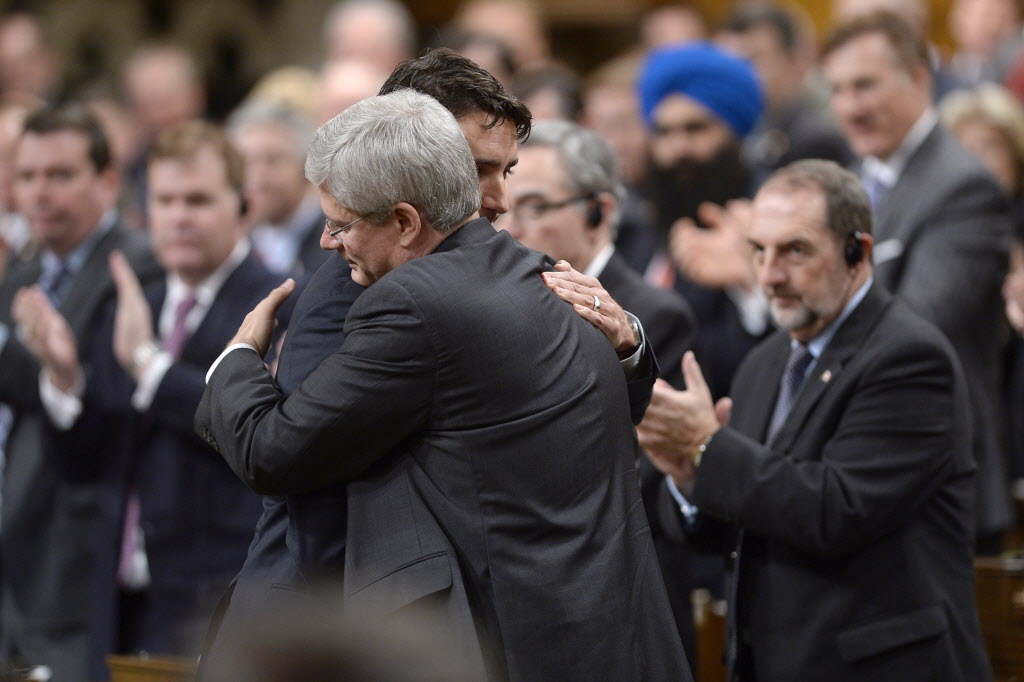 Bitter enemies hugging it out after a tragic incident. Not relevant to this article, but still a powerful image nonetheless.

Something you get used to while living in Canada is that we are a passionate bunch when it comes to politics. Sure Americans love to complain about how Congress never gets things done, but how many of them really know what they’re talking about? Even the ones that consider themselves “political” fall into a quagmire when it comes time to explain what they mean when they say they’re “fiscally conservative”. Not so with a large amount of Canadians. We get angry, we get involved, we care. Unfortunately, caring deeply for something comes with the risk of being sucked into the drama and the muck of it. This combined with a boat load of money going into campaigning has led to some truly nasty campaign ads over the years. Historically, no one does crushing campaign ads quite like the Conservatives, and if you need a reference, just take a look:

Just brutal. These ads are obviously intended for those that aren’t that affiliated with politics in Canada, but even the most educated people get reduced to blind passion over these things. The people who aren’t educated often use these ads as talking points in their day to day conversations, which colours everyone’s impression of what goes on in Canadian politics and already decides your perception for you when you do get educated. Funny thing about politics is, that no matter which side you’re on, there’s always a way to research events in a way that makes the side you’ve already decided to support seem like the right one. It’s why getting these crushing ads out early on is so important, and why this newest one by the Conservative party is so strange.

What… was that exactly? You can see what they’re going for here, but it doesn’t quite come together in the end. Justin Trudeau for those that aren’t aware, is essentially Canadian royalty. Son of the eccentric and beloved Prime Minister Pierre Trudeau, and as a proud owner of an extremely handsome face, there is a lot of hype surrounding this man just based on his fame alone. What this ad attempts to do is turn that strength against him, presenting him as being a vapid celebrity who has no real business running a country. This is all presented in such a strange way though.

First, the viewer has to accept that we live in a dystopian society where these 4 are a mysterious group that secretly run this country and host a series of puppet elections to decide on leaders they have already chosen, all to create the illusion of a democracy. This isn’t helped by the fact that their poor acting somehow gives off this vaguely diabolical vibe from them; as if they’re exhibiting the banality of evil by casually deciding which sock puppet is bested suited to fit their iron fists. Getting past this, they heavily condescend to Trudeau, making several references to his youth and alleged lack of experience, but things take a strange turn towards then end when one of the apparent Canadian God-Kings says “I’m not saying no forever, but not now”. This has to be a first for attack ads, endorsing the opponent for a future election, but even worse is what it does to the rest of the commercial. Suddenly Trudeau is portrayed as an underdog, so lines like “he’s got some growing up to do”, now translate into “I continually underestimate young people”. The condescension exhibited throughout gets turned into energy for the audience to use to support Trudeau. These overlords now seem like rich bad guys from a mediocre 90’s flick, turning their nose at Trudeau for having the audacity to suggest legalizing pot. That last “nice hair though” comment by that older gentlemen isn’t the graceful put down the writers thought it was but instead another in a line of aggravating and condescending remarks. In trying to be less overtly aggressive than they were in the past, the Conservative party put out an ad that gives the impression that they’re bullying their opponent. I mean, by the end of it, I definitely found myself siding with Trudeau for no reason other than he didn’t spend millions to make people watch this garbage.

In the past the attack ads have been rallying points for the Conservative party. A huge ram for them to push through and annihilate their competition to clear the way for supporters of all kinds behind them. Uninformed voters, informed voters, and the huge amount of Canadian politics buffs were motivated and inspired by these aggressive attack ads… and I can say with confidence that this ad will not have the same affect.

“Stephane Dion has built a reputation for being a ‘come-from-behind politician’.”

– A line from a Canadian history textbook I had back in highschool. Immature as I am for admitting this, it still cracks me up to this day.