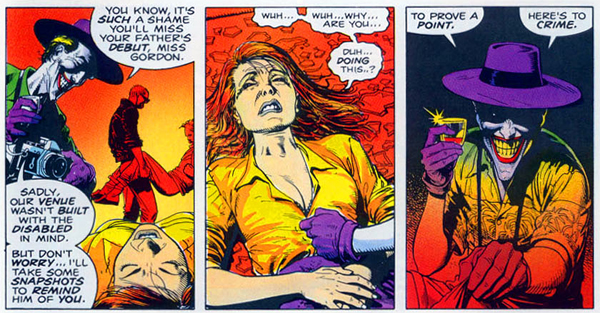 Bruce Timm recently announced at this year’s Comic-Con that the seminal Alan Moore graphic novel, The Killing Joke, is finally getting an animated adaption. Most of the reaction has been positive since this is one of the greatest comic book stories ever told, but there has been some dissenting opinions among those concerned with Barbara Gordon (AKA Batgirl) and her portrayal in this story. Famously shot and crippled by the Clown Prince of Crime, Barbara is stripped naked and has pictures of her body and crying face taken and used by the Joker as a means to drive her father, Jim Gordon, insane. Many have argued that this was a sexist way to treat Barbara (who still continued to fight crime as the Oracle after the incident), but that assumption comes with what in my opinion amounts to a fundamental misunderstanding of the story itself. I’ve written about this particular controversy before in another post, and I’ve even gone over the fact that this plot point was only ever allowed to occur due to blatant sexism (Alan Moore’s editor told him to “cripple the bitch” when he asked for permission to do this to Barbara). Even with all that, I still absolutely have to make my piece on this subject since there already seems to be a backlash brewing over this.

Disclaimer before posting:
– Hated #gamergate and recognize it for the sexist trash it was.
– I know women have a history of being marginalized in society.
– I realize that this treatment is systemic and prevalent to this day and applies to fictional women as well.

With that said, I give a hearty “go to hell” to anyone who wants to protest or make demands about Barbara’s treatment in the story. It is what it is, I don’t care if you want to water down the story with pointless demands and reduce the impact of what happened all for the sake of empowerment.

The Killing Joke isn’t about empowerment, or the good guys beating the bad guys, or any such thing you want to reduce it to. The story is about random tragedies that happen in our lives and how people can relate to and deal with them. It’s a story that is particularly about Batman and the Joker because of this.

Barbara Gordon was randomly gunned down, stripped, and exploited for the purposes of creating pain and tension for Jim Gordon. She wasn’t in the line of duty, she didn’t go down saving someone, and she did not have time to process or accept what was about to occur; it was an awful thing that happened to a good person because of a pointless and petty reason. And that’s the point, that’s the killing joke, that nothing in life has any meaning because everything we know about the world can be reduced to nothing in an instant (or one bad day).

You wanna look at it like it’s about another example of women being “fridged” to create “manpain”, fine, because it was only ever allowed to go through DC’s censors because of sexist attitudes back then. But just know that’s not what was happening, and that’s not what the story was about. Joker was using Barbara to break Gordon, who he was using to prove a point to Batman. I hate to use an argument often used by MRA’s, but no one is complaining that Gordon himself was merely a plot device used by the Joker to hurt Batman.

That’s what Batman and Joker’s feud can be seen as anyway. In Joker’s view, everyone is just a tool to be used and broken to prove his point to Batman. The Joker is driven by a nihilistic view that existence is a great big joke and his random acts of evil are there to prove that. Batman’s is his opposite because one bad day made him into a person who directly opposes Joker’s views and methods, someone who tries to bring order to a broken world, and because of this the Joker became fixated on proving his point to him in particular; which ironically gave him meaning and purpose in a world he’s dedicated to proving otherwise to (Scott Snyder’s Endgame has a beautiful quote summarizing this dynamic).

The Killing Joke is my favourite comic of all time because of the impact it had on me, and also because of what it did for the Joker’s character. On top of helping solidify him as the Bat family’s central antagonist, it gave him depth and honest to God emotion. What happens to Barbara Gordon; the cruelty, the suddenness of it, is an important part of the story that defined the Joker’s character. I’ll be damned if I let keyboard warriors who don’t care for or understand the story undermine it with their personal gripes about what happens in it.

Criticize it as art if you will, many have including Alan Moore himself (but to be fair, Moore believes all superheroes and their stories are abominations), but don’t treat it as a crass indictment for women in comics when it’s really so much more than that.

“Just wait till your father gets home! He’s going to be furious about all this mess.”