Let me tell you about this awesome show called Steven Universe. It’s essentially about a boy who lives with three adoptive mothers who are aliens simply known as “Gems” that used to work for his mother (who is also an alien) who basically “died” giving birth to him. His father is a human so the boy belongs to both species, and the series definitely remembers to address the full weight of what that means. Since his mother was a controversial figure among her race (to say the least), there is a very good reason for her and her followers to have gone to Earth in the first place. She left a massive legacy for Steven himself to grapple with, and one that is quickly catching up to them in the form of a looming threat from afar. That serves as one of the show’s central dramatic tensions (the other being what it means to have a family), but another main theme that has developed recently has been the concept of fusion and the increased focus on it. 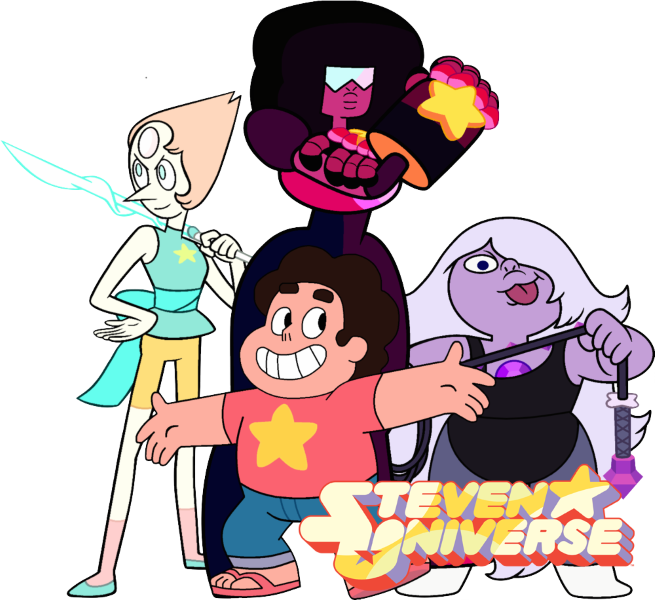 The cast of Steven Universe

In the world of Steven Universe, Gems possess the ability to fuse with one another in order to become stronger. This is fairly common in animation (especially in Eastern animation), but in this show fusion carries a lot more weight than that. Steven Universe is one of the only cartoons out there that has a high degree of what I can only describe as social sensibility. The cast (who all reside in a fictional small town known as “Beach City”) is multi-cultural, the characters display a wide range of attitudes and beliefs, there is a ton of queer representation, and the characters are all realistically flawed in a variety of ways. Because of that, the show feels very “human” despite the fact that a large portion of the cast is comprised of aliens. This allows for the creators to slip in metaphors and double meanings, both overt and subtle, into a show that kids can watch as well. One of the show’s biggest vehicles for delivering messages in that regard is fusion, and the exact meaning behind it has been a point of contention among fans of the show.

The debate, to put it bluntly, is about if fusion is a metaphor for sex. In order for gems to fuse, they have to dance with one another, and some of these dances can be interpreted as sensual (so much so that Pearl, one of Steven’s guardians, had to cover his eyes while he was witnessing one of these dances). On top of this, the dialogue revolving around fusion touches on a lot of the concerns that deal with sex specifically. Things like a heavy emphasis on consent, compatibility, two halves becoming one whole, and a deep level of intimacy are reoccurring elements in the discussion on fusion. This caused someone to eventually ask writer Matt Burnett straight out if fusion was just a metaphor for sex.

@PepsiFur A fusion represents a relationship between the people that form it. And by relationship, I don't mean strictly romantic.

His response saying that fusion was a representation for relationships in general, settled the issue once and for all, but not in the way people have assumed. Many took this answer as him saying “no, fusion in no way relates to sexual relationships at all”, when really it was more of a “yes and no” response. It is the kind of answer that we should be able to piece together ourselves just from watching the show. Over the course of the run, fusion has been depicted as a partnership between two friends, the union between two lovers, and a forceful engagement initiated by an unwelcome aggressor. It can be a lot of things, but its success always seems to be predicated on emotional honesty and openness from both parties. Forcing a gem to fuse is wrong, and lying and manipulating someone into fusing is depicted as wrong as well.

With the subject of fusion, Steven Universe makes a compelling case for show’s teaching kids important lessons about things they won’t have to deal with until they’re older. To say that fusion is totally about sex is small-minded, and to say that it doesn’t relate to it at all undermines a lot of the important themes and messages the writers are trying to get across. On top of having love and acceptance for those different than us, Steven Universe teaches us to value our bonds and respect those we know intimately. It’s so easy to take those close to us for granted, and unfortunately, it’s those people that we hurt the most. This show seems to understand this as it does many other things, and I can’t recommend it enough.