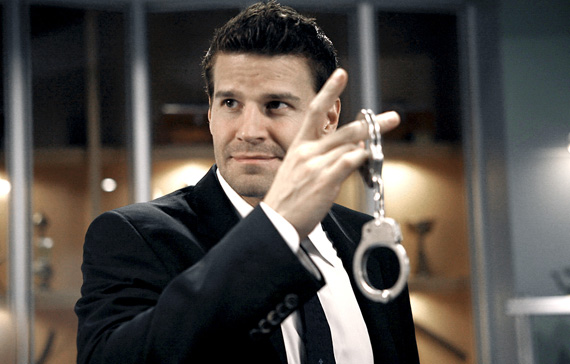 Bones, the first drama I really got invested in, and the first seemingly endless procedural I ever outgrew. Unlike with The Mentalist and the disastrous end it had with me, my break up with Bones was civil and clean. I just grew to understand that the show and I wanted different things in life, and that our continued commitment to one another would be to both our detriment. I basically wanted to settle down with a more serialized show that took more chances and had something to say, while Bones was content with falling into a routine and doing mostly the same thing over and over again. We realized we were in different places in our relationship and moved on, although it is fun to revisit and reminisce about the old days with a fresh pair of eyes.

There’s also the fact that David Boreanaz is a god damn treasure.

“If this were the result of sex games, then the legs, they wouldn’t be bound together. Well, come on, you know? Looking for a little nooky, the last thing you’d tie together are the legs.”

“Here’s what I was thinking. Female, dominant, strapped for cash, meets wealthy teenager on the outs with her parents. Convinces her submissive husband to hold her for ransom.”

Booth with yet another Holmesian display of detective skills. It’s kinda sad that this needs to be said but, sexually submissive people aren’t going to just do whatever their dominant says, and they sure as hell wouldn’t help commit any kidnappings for him/her because of the kind of sex they have together alone. They’re exploring a sexual kink, not some weird vampiric thrall.

BRENNAN: Seeking sexual gratification through the manipulation of power. Probably the oldest of fetishes, master-slave. It’s all about dominance.

BOOTH: Well, this only comes up when the bloom comes off the rose, if you know what I mean.

BRENNAN: I don’t know what you mean.

BOOTH: You know, when the regular stuff— when it gets old, you need to spice it up, it’s over. When sex is good, you don’t need any help.

BRENNAN: Oh, that’s for sure.

Booth is starting to sound a lot like Riley from Buffy at this point, and it’s here where the writers reveal this funny little prejudice about BDSM. Playing sex games and engaging in this type of activity can just be a fun way for people to explore a fetish. It’s weird that this show would suggest that it is some sort of last ditch marital sex Hail Mary maneuver, and even weirder that strict adherence to vanilla sex is presented as a point of pride. That’s like being proud of the fact that you eat one type of ice cream; I mean, I personally only ever eat vanilla ice cream, but it isn’t something I’d brag about to my friends. If I told said “when ice cream is good, you don’t need any help” in response to them adding sprinkles to their cones, I wouldn’t get an “Oh, that’s for sure” response, but I’d definitely get a few confused glances coming my way.

All this seems more adorably ignorant than outright offensive however. Ya the show tries to shame people over the way people conduct themselves in the bedroom, but it’s Bones. It’s a show that tries to touch the surface of so much without looking underneath it, which is kind of ironic considering it has a lot to do with forensic anthropology and, well, bones. I’ll always have special place in my heart for it, but the level of misunderstanding here was too fun not to write about.

“And on the seventh day the lord created David Boreanaz to enrich the lives of all those who are fortunate enough to witness his splendor.”