I know what a lot of you are already thinking: Comparing these two shows is like apples and oranges. Jessica Jones is more of a neo-noir drama about personal trauma, while Daredevil, despite (arguably) not starring a person with super powers like Jessica Jones does, is clearly a superhero show. However, since both shows are Netflix based expansions of the Marvel Cinematic Universe, I think they merit comparison, and since this is the internet I can say whatever I want. In this post, I’ll be pitting these two shows against each other in 5 categories, which are “Action”, “Supporting Cast”, “Plot”, “Hero”, and “Villain”. The show to win the most out of these 5 will get the title of “best show” as decreed by this blog, and if the results offend you, welcome to a world full of people with differing opinions.

This category is a gimme. There is no debate, no question at all in my mind, Daredevil absolutely crushes Jessica Jones here. While the former series has me at the edge of my seat for most of its battles, the latter one has me wondering what the hell is going on half the time with its shaky ass camera and boring set-pieces. Jessica Jones stars a hero with super strength and a man with unbreakable skin, yet the most interesting part of their every fight sequence is the dialogue that happens in the middle of them. Meanwhile, Daredevil seems to put all of its focus on the fights themselves, and the details that surround the act of combat are also explored. Most shows don’t ever acknowledge this, but fighting is an incredibly tiring affair, so much so that half-way through taking out just one goon should leave even the most physically fit person totally out of breath. Daredevil is the first show I’ve seen where after the hero fought his way through a mob of thugs, he actually looks and sounds like he’s been through an enormous fight. It’s that attention to detail (and the general lack of interest in this area from Jessica Jones) that gives Daredevil the win here. 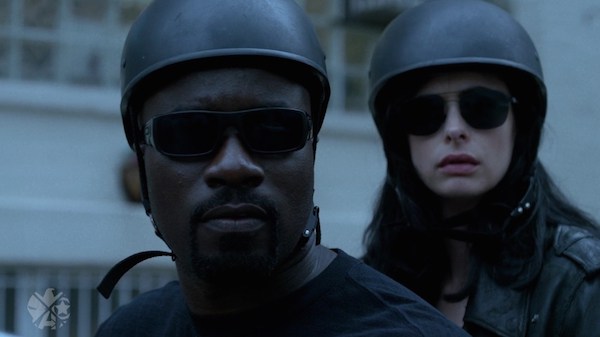 Both shows have wide cast of supporting players surrounding our heroes, and in the case of Daredevil, villains as well. Daredevil‘s Matthew Murdock has his law firm comprised of his life long friend Foggy Nelson and newcomer Karen Page, while Jessica Jones is supported by her sister Trish Walker, a sleaze ball attorney and frenemy Jeri Hogarth, her annoying and needy neighbour Malcolm, and the incomparable Luke Cage. Both shows have interesting characters that stand on their own (although I could never quite get into Karen Page or her “mysterious” past), but the point of this category is to measure how they resonate with each other, and in that regard this is an easy win for Jessica Jones. Despite the law office being a central aspect of Daredevil, the supposed co-workers never quite seemed to mesh together. They, against all expectation, ended up lacking chemistry, something Jessica has with each and every one of her cast mates in spades. Still, Daredevil also had the benefit on focusing on its villain Wilson Fisk, a crime lord with an assistant/best friend, and a fiance who are both interesting characters in their own right (although the former died due to a shocking, almost uncharacteristic, level of stupidity on his part). Even acknowledging this though, the scenes between Jessica’s sister, her friends, her lover, and even her nemesis always tend to carry much more of a spark than anything Murdock could muster up with anyone he knows.

Unfortunately, this category is less a contest of which show was best, but more, which show was less inept in conveying things. On one hand, we have Daredevil which centred on this war between Matthew Murdock and Wilson Fisk which ended up boiling down to a random series of loosely related events that culminated in Fisk eventually having a temper tantrum and imploding his own operation by killing off his accountant. It was less the heroes triumphing over their adversary, and more just them holding out until the baddie screws up bad enough for them to capitalize on. Meanwhile, Jessica Jones centres on her battle with the mind controlling psychopath Kilgrave as she tries to bring his power and his nefarious deeds to light. Unfortunately a lot of the events in the plot can be viewed as a game of Kilgrave hot potato where they totally got him… until they don’t, rinse and repeat until Jessica decides it’d be better just to kill him which just makes a lot of what was developed earlier feel pointless. Why put all the effort into trapping him if they were just going to be content in killing him? Why didn’t they just let Sergeant Tool Bag kill Kilgrave when he first suggested it? Watching it, it felt as though the point was to bring Kilgrave and his capabilities to light, thus exonerating the countless people he’s forced to do horrible things on his behalf, but the result of just killing him in the end made it look like the captures and escapes were just the show spinning its wheels. Ya, both of these shows have messy plots, but the fact that Daredevil treats its villain almost like a deuteragonist is novel enough to give it the edge in my book.

A lawyer and a private investigator walk into a Netflix TV series, which of the two ends up being the more compelling hero? On one hand, we have Matthew Murdock, a lawyer by day and vigilante by night who is driven by the life and death of his father, along with a huge well of anger against criminals he channels into protecting Hell’s Kitchen. On the other hand, we have Jessica Jones, a super powered orphan with a bad disposition who tried reaching out and being a hero, only to be used and traumatized by a mind controlling narcissist in a purple suit. Both these characters have compelling backstories, but their strength here comes from how their pasts inform their actions on the show. On Daredevil, Matt Murdock’s childhood means he’s constantly resisting the urge to kill people, pontificating on his need to protect “this city”, and – sigh – going to church and discussing his sins with a priest (one of the oldest and most tired action cliches known to man). With Jessica Jones, her terrible past materialize by essentially making her a shitty person. She is (understandably) closed off, doesn’t trust anyone, has a dark streak, basically stalks Luke Cage in her spare time (and eventually sleeps with him knowing she was made to murder his wife by Kilgrave), and is generally unpleasant to anyone unfortunate enough to get in her way. She tried being a hero once out of a genuine desire to do the right thing for other people, and it burned her, but the return of Kilgrave inspires a part of herself that wants to be a better person. Every instinct she has tells her to run, but she stays and fights because she wants to confront her trauma, which also means fighting against its result, a terrible version of herself she needs to overcome along with Kilgrave. To me, it’s Jessica’s personal stakes that make her more compelling than Matt, who seems primarily concerned with “his city” and an apparently familial propensity for anger issues. The closest he comes to reaching me as a viewer was his shattered reaction to his friend finding out the truth about his identity, but by then it was a little too late, and what follows just doesn’t sustain interest.

This is where both shows shine the hardest. Daredevil‘s Wilson Fisk and Jessica Jones’ Kilgrave are far more compelling than anything else to come out of Marvel’s vast cinematic universe. Fisk is a psychologically scarred thug masquerading as a benevolent crime lord bent on remaking his city, while Kilgrave is a man who received the power to control the minds of anyone he comes in contact with at a young age, thus completely warping his reality and his understanding of basic human interaction. Fisk’s arc runs parallel to Matt’s throughout the first season, both men wanting to “save” Hell’s Kitchen, and both men with dark pasts and deeply affecting relationships with their fathers that shaped their futures; however, it’s Fisk who is the more interesting of the two as he surprisingly gets the more meaningful relationships, including a humorous and heartfelt romance with an art dealer named Vanessa. In a lot of ways, Wilson Fisk acts as the beating black heart of Daredevil, a man constantly fighting against his baser nature to “better” the people and the city around him (albeit in an extraordinarily brutal fashion, so perhaps he’s not fighting hard enough).

With that said though, he still isn’t as compelling as Kilgrave, and I think the reason here is David Tennant. Nothing against Vincent D’Onofrio, but Tennant injects such a delighted malice into his performance as Kilgrave. The threat with this character is his mere existence and his destructive power that also doubles as a commentary on how privileged individuals in society can have their integrity corrupted if they go on unchecked. Kilgrave is ultimately a failure as a human being, but you have to wonder if he could have been anything but that given his ability to get people to do whatever he wants.  Poor people who do bad things generally do so because they feel like they have no other option, but when you have everything you could possibly want, the thing motivating wrongdoing is a mere whim. Kilgrave doesn’t see good and evil, he just does what he wants and has been operating unchecked for so long that the needs and well being of others have been completely erased from his consideration. There is something deeply disturbing about that, and thanks to Tennant, also something very funny as well (it’s interesting how often these two things go hand in hand for me). From the moment we saw his reaction to Trish’s supposed death (a “whatever” response followed by an armchair criticism of her show), I knew I was in for a villain unlike any I’ve seen before. Both these villains are high-wire acts to write and perform, but in the end, I think Jessica Jones‘ Kilgrave succeeds a little more than Wilson Fisk, and as a result, pushes Jessica Jones itself over Daredevil in my eyes.

It feels to me that the show about a super hero turned private investigator has a much clearer voice in getting out what it wants to say about its characters than Daredevil, a show that wants us to be in awe of its mythology instead of analyzing it.

*Someone speaking in a scratchy voice: “Hell’s Kitchen…”

– Every major character on Daredevil.