I’ve always maintained that the greatest strength of iZombie is its stellar ensemble cast. Every individual main character on the show feels like they are strong enough on their own to maintain any story they find themselves in. They’re all very different people that happen to work very well together, but once they’re off doing their own thing I can’t help but think “Whoa, I would watch this show!”. Liv Moore is a great protagonist (with an appropriately punny name), but unlike creator Rob Thomas’ other famous heroine Veronica Mars, she isn’t her show’s greatest weapon. That distinction belongs to the cast itself, and this article is about how each of them are strong enough to helm their own TV spin-offs because of that strength. Here are five examples to illustrate what I’m talking about.

1) Clive could definitely star in his own cop drama

Clive Babineaux is that rare sidekick-to-eccentric-protagonist who works in law enforcement you see in TV procedurals (or procedural/serial hybrids like iZombie) that is actually good at his job. His skills as a detective are often what lead to the conclusions in the cases he works, and while Liv’s visions act as helpful clues, they are not the only thing leading him to his conclusions. Clive’s position in Seattle’s police precinct is also rife with potential drama as he’s seen as the inflexible and obtuse cop among a group of them that is willing to bend the rules a little (or a lot) to get the job done. Enrico Colantoni’s overzealous and corrupt detective would work great opposite to Babineaux, and FBI Agent Dale Bozzio already works out as a love interest who he shares great chemistry with. Hell, you don’t even have to take out the sci-fi twist of zombies for the show to work, as Clive investigating the conspiracy surrounding them in Seattle was always a lot of fun. 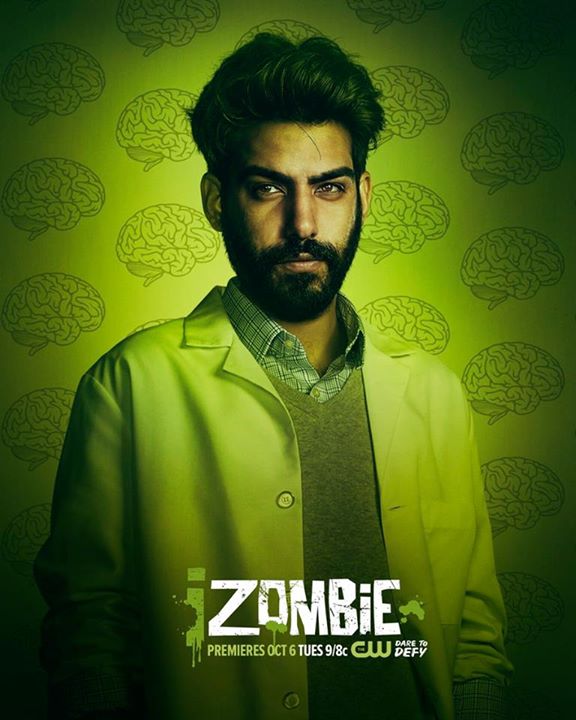 As fun as Ravi is on the show, no one conveys the gravity of awful situations quite like he does. His relentless pursuit of a zombie cure combines hard science and good old fashion sleuthing to great effect. Imagine him in a conspiracy, sci-fi thriller about a disease the government doesn’t want you to know about spreading throughout the U.S. population. Maybe the development of a bioweapon went awry, and Ravi is the one that both wants to clean up the mess and expose the truth behind it,  all while trying not to draw too much attention to himself. The character can operate in nearly any context because he’s the cast member with the strongest level of chemistry with everyone else. He plays well off everyone basically and sort of acts like the glue.

Yup, this one is obvious, but it works. Imagine a world where zombies have progressed to being a far larger threat than they already are on the show, and Major is one of the few people in the world with the ability to sense their presence. In terms of zombie apocalypse time-table, this would be between total ignorance of something being wrong, and the complete and total fall of society as we know it. In this show that Major would inhabit, the world knows about zombies, but is having trouble identifying and fighting them, this is where Major would come in with his quips and leading man mannerisms, while also combating his own demons and angst. Basically something like Angel, but more zombie-centric, and with a main character that somehow has an even more ludicrous name… Or maybe a Walking Dead that’s far less bleak, and is also actually fun.

This show would basically be what Blaine’s been doing during iZombie‘s second season anyways, but blown up into its own series and with more of an emphasis placed on his deeply dysfunctional relationship with his family. Obviously since this is starring Blaine, he’d be more of an anti-hero taking on a group of characters that are equally as despicable as he is. Stacey Boss would be great as an opening villain, and the fact that Blaine is a zombie could work as his ‘X-Factor’ in the criminal underworld of Seattle. With a colourful cast of misfit henchpeople, and a setup as fun as him working out of a funeral home doubling as a brain delivery service, this is perhaps the most obvious spin-off of the proposed five.

Peyton is sad she didn’t get a cool season 2 poster like everyone else.

How does one prosecute zombies? What are the legal ramifications behind dealing with a potential zombie outbreak in Seattle? What would be the logistics? These are questions that nobody is asking, but absolutely would if a show starring Peyton existed. She comes equipped with a best friend that already is a zombie and a delightfully slimy rival played by the great Ken Marino, so this kind of show would be full of humour to be mined. There would also be the personal and ethical conflicts of wanting to see a negative force infecting a city eradicated while also being friends with a member of the undead, which could be very interesting when all is said and done. But mainly though, I’d really just like to see Michalka and Marino play off each other in a legal setting.

A Show With All of These Elements Already Exists!

If I did my job well, I just described to you a series of interesting sounding TV shows, and if the above does interest you, one should gain a new appreciation of how great iZombie is for being able to connect so many different genre’s and story-telling elements into one very entertaining CW show. Liv Moore goes through several personalities throughout the show’s run due to the brains she has to eat, and as a result we get a very… eclectic protagonist. The fact that she’s the lead character on this show that contains so many strong characters is fitting then, as she herself combines traits from many different and interesting places. If you’ve read through this and haven’t started watching this show already, then what are you doing? Get on it!

Quote of the Day

“You know what would be fun? A zombie show where a zombie is the star.”