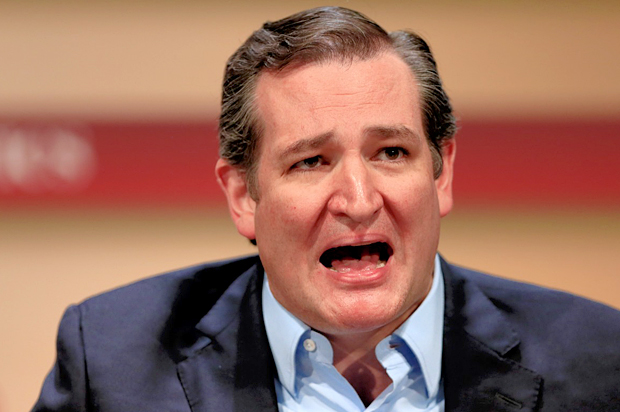 Ted Cruz has a weird face. You’ve heard your friends tell you this, you’ve heard family members tell you this, and you’ve heard strangers on the internet tell you this as well. From random internet trolls, to even some professional journalists, it’s one of the key things people discuss in regards to him. It was so prevalent that at one time, scientists had to weigh in on why we hate Ted Cruz’s face so much. The point I’m driving at here, is that Ted Cruz’s face has entered the political discourse surrounding him at a level most would consider inappropriate for just about any other candidate. What I’m wondering is if this “Cruz is ugly” discourse is a response to the general awfulness of his personality, or is the hatred for him amplified because of his face. There are definitely worse politicians out there that we hate more, although I have trouble thinking of more than one.

In recent weeks, we’ve come to know for sure that Ted Cruz is a sniveling weasel that would sell out his pride and his family’s dignity for his own political future, but that has always been something we have suspected, so it feels more and more like most people just don’t like his face. I mean, we were making fun of his looks before he was licking Trump’s boots on the national stage, and we’ll be doing the same in 2020.

Here’s something we need to worry about though. We know there’s a lot of deplorable people out there who constantly dump on female public figures, many of which are politicians, for their appearance, but at the very least those people get rightly called out for being awful. Why not do the same for Cruz? Obviously, the situation for women and men in politics is totally different, with women not needing yet another thing to keeping them out, and men not having the same expectations of keeping up physical appearances that women do, but at its basest level, we should be able to admit that talking trash about how weird Ted Cruz looks is unacceptable right? Discussing his shamelessness, his naked ambition, and his vile attitudes towards certain groups of people is absolutely fair game, but also having to tack on that he looks like a melted candle that was previously sculpted in the shape of a normal looking human, or that he has the appearance of a blobfish that spent its entire life isolated from others of its kind and is going through some sort of animal depression… doing that, seems counterproductive. Any point you made about Cruz before, his weasliness, his lack of ethics, his hypocrisy, is instantly wiped away when you also add that he looks like how one would imagine the Zodiac Killer to look like.

So come 2020, when Ted Cruz is crashing and burning in the Republican primaries because his opponents will inevitably drag his named through the mud and shame him for being a worm that would willingly sell his soul to work for a man that once called him a pussy (which I am told he enjoys grabbing without permission) and then went on to humiliate him on a national stage, remember not to insult him by pointing out how he looks like a twisted bizarro version of Ronald Reagan, a WaReagan if you will, like his evil doppelganger or something except he’s made to look like a prop designed to espouse Reagan’s values but without any of the charm or charisma or the sense that the person speaking has any sort of integrity in or outside his politics. Pointing that out would be wrong, as there are far more effective avenues for attacks against Ted Cruz.

– Ted Cruz, before he was degraded and unmanned by Reince Priebus, a man whose character is as dubious as his name, and Donald Trump, who needs know introduction.

Other Quote of the Day:

“You Cruz you lose.”

Me, whenever I find myself observing Cruz’s decisions and behaviour.

America, in response to Cruz going from potential 2020 frontrunner to national joke.