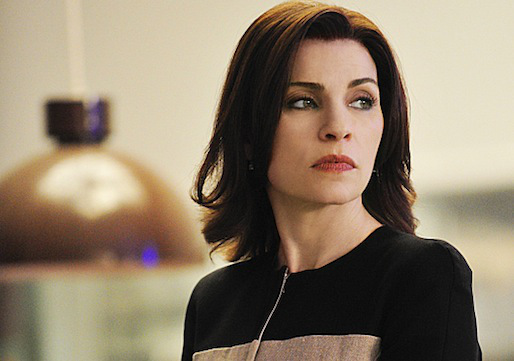 I love The Good Wife. It’s clever, bold, funny, and unbelievably resilient. I mention resilience because it’s what leads me to my conclusion that this show is the most impressive one on television. After just having its 6th season midseason-finale (where the show took another in a long line of enormous risks) while being well over 100 episodes old, I continue to be in awe of its ability to still be so damn good. Often being seen as a just another CBS procedural drama from those who don’t know any better, The Good Wife is head and shoulders above the rest of TV’s network dramas and is without a doubt on the level of prestige cable dramas such as Breaking Bad and Mad Men. The acting on all fronts is phenomenal, the scripts are fantastic, and mother of God is the satire on politics and the law on point. Perhaps cable dramas are more tightly written, with less plots being dropped or going undeveloped as they have on The Good Wife on occasion, but those shows don’t have to run for half as long as it does. The ability to churn out 22 quality episodes a year is remarkable on its own, but to be able to balance so many plots, character arcs, and themes just makes me want to scream out in empathy. “That’s just way too much work!” I want to say, but all that comes out is “thankyouthankyouthankyou!”, since this show ends up doing so much right.

Unlike most shows, The Good Wife actually had pretty solid footing in place for its first season. It was definitely driven early on by the single image of a wife standing beside her disgraced politician husband following a harrowing sex scandal. This a turning point in the humiliated wife’s life, and as our protagonist (Alicia Florrick, who is played flawlessly by Julianna Margulies), she is forced back to work and ends up striving to find a way to reassert her identity through becoming a lawyer again. From then on Alicia quickly proves herself as one of TV’s most complex heroines, as she is caught between the legal and political worlds. The first two seasons were very solid pieces of television that ended on a very, very high note, the next two seasons, 3 and 4, while still good, weren’t quite as excellent as what came before. There was this sense that seasons 1 and 2 were “complete” packages in terms of story while 3 and 4 were searching for a direction to really grab on to. Everything changed in season 5’s fifth episode “Hitting the Fan” (the show’s most aptly named and best hour) and it has been uphill since then. Like Alicia back in season 1, the show skillfully reinvented itself in a way no one thought was possible, and came out so much stronger than before. On top of that, it handled the departure of one of its main characters by taking yet another huge gamble in the last third of a season that already took enormous risks.

It’s those risks that help make the show the most impressive on TV right now. The insane amount of content the show balances is impressive on its own, but what truly puts it over the top is its willingness to take its universe and flip it on its head, to never make an episode “just another episode”. The show balances its procedural elements and has the “cases of the week” express something about its serialized plotline (which the show has become increasingly committed to), and it takes characters in directions audiences don’t always expect. Some of these risks fail miserably, but most of them pay off hugely and you end up loving the writers for taking them.

Speaking of risks, the show is never afraid to crack a joke whenever it can. No matter how dark the situation, the show is very good at making light of it with clever situation-based humour. These last two seasons have been especially good at this, taking serious situations and showing how ridiculous they can be from a certain perspective. Politics and law are the show’s frequent targets, and I’ve yet to see something satire those things quite like The Good Wife. Ranging from charmingly blunt, to disarmingly subtle, these jabs from the show expose the frivolity and fallaciousness of both these worlds and how they are far more connected to one another than either side would care to admit. The current arc featuring Alicia running for State’s Attorney in the show’s third election storyline (the previous two featuring her husband) puts these comedic elements on full display as we watch “Alicia the Lawyer” and “Alicia the Politician” try to make sense of their situation. Also the fact that the show can make its third election storyline infinitely more engaging than its previous two while at the same time finding a way to work in its hilarious thinly veiled True Detective parody (“Darkness at Noon”, an excessively dark cop drama that Alicia is a fan of) is still something that brings a smile to my face.

With an endless stream of memorable guest stars (including Michael J. Fox as a surprisingly slimy lawyer), incredible isolated moments of acting, memorable concept episodes, quirky characters, tragic characters, romantic tension, and so much more, The Good Wife is undoubtedly TV’s most impressive show. There’s just so much to it. It’s remarkable (with the ability to replace a romantic lead with a brand new and incredibly likable character played by Matthew Goode for example), but it’s also endlessly inventive. It’s not just some novel concept as some may have assumed it was after reading its premise, it goes so much further than that. The show’s creators (Robert and Michelle King) have made something really special here, and it isn’t something that we’ll forget long after its ended. Very few shows can be so huge and so expansive, with the ability to take all of the mistakes and masterstrokes its made along the way and draw them into something that is truly beautiful.

Beautiful. I can’t think of another word for it, but that’s what The Good Wife has been in every sense of the word.

“A good wife is one who serves her husband in the morning like a mother does, loves him in the day like a sister does and pleases him like a prostitute in the night”