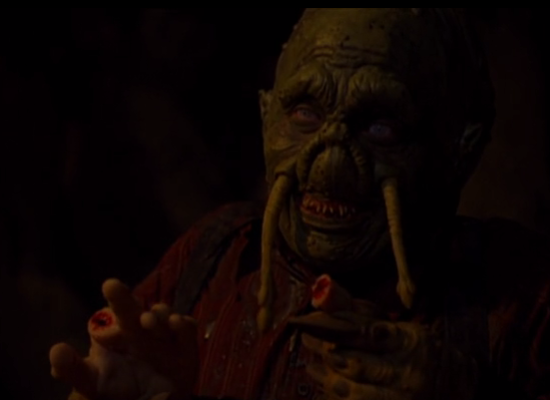 In the episode titled “Magic Bullet” from Angel, a demon played by Danny Woodburn makes an appearance. He’s short, green, and apparently, an executive at some company. He encounters Fred, who at this point is treated as a fugitive due to things that happened in the plot. She finds herself shacking up with this unlikely roommate in a cave somewhere and they eventually make a connection over their shared fates as fugitives. You’ve seen this set up a hundred times before, the lost girl and the curmudgeon-y odd ball forced together under extraordinary circumstances. At first they hate each other, then the lost girl warms to him when she realizes he isn’t threatening, and then the curmudgeon melts under her charms and grows to like her, although he has difficulty expressing his feelings. This set up is so obvious that the little demon himself even points out the trope in dialogue,

“Wow. Amazing. Two beings dissimilar as you and me discovering a shared link against a common foe. Huh. The irony. My feelings for you are changing.”

After initially distrusting him for being a demon (he assures her he’s a vegetarian when they first speak), she grows to realize she was mistreating him. All is good, the rhythm of the scene is going as one would expect until suddenly… 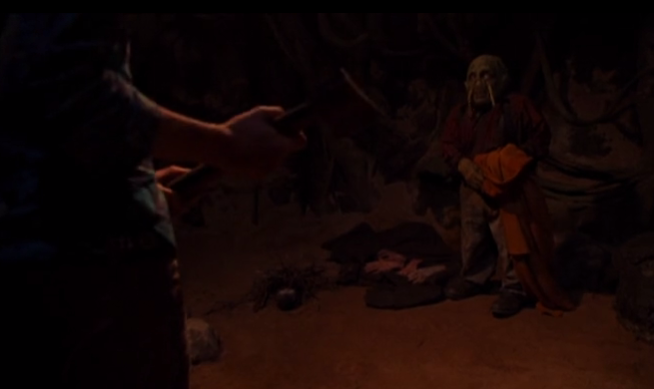 The unnamed demon accidentally unveils a stash of severed human hands. The charming shorty tries to play it off with his wit and humour, until he succumbs to his hunger and picks up a hand to eat its fingers. Offering up the hand to Fred, he utters the deliciously cheesy line “Finger food?” and attacks.

Earlier in the scene, the demon claimed he was driven underground due to what he referred to as a “Demon Jihad” happening on the surface, so it’s fitting that his last words to Fred before being hacked in the brain with an axe are “I GOT YOUR DEMON JIHAD RIGHT HERE!” Wait, did I say fitting? I meant totally random and nonsensical. Like a crazed beast, this demon was chomping right into Fred’s shoulder and spilling her blood before being killed. It’s that blood part that serves as the point of his character, since it gives Fred an idea of what to do about her fugitive problem.

Overlooking everything about this character from beginning to end just has me think he must be the strangest character in the entire Buffyverse. This guy, who initially shows up out of nowhere, is built up as your typical jaded older companion who eventually comes around to loving the plucky lost girl. Of course this is subverted when it turns out he does eat humans and he is as much as a monster as originally assumed. All of his dialogue and all of his claims (which were hard to swallow to begin with) come into question when he jumps at Fred screaming about a demon jihad. All of this though was meant to lead to the moment where Fred has a revelation about her blood. That’s it. That was the entire point of this little monster, which is such a roundabout and strange way to go about it. I mean, she could have cut herself on a branch, but no, she has to befriend this weird little finger eating demon who acts like one archetype and rapidly shifts to another. The scene where he transitions from charming fast talking friend to crazed beast was so strange feeling and somehow dirty to me that it had me thinking about a lot more than the show.

My theory on his existence is simply that the writers wanted to go one direction, and changed to another while sitting down and thinking about the plot of this episode. A lot of season 4 was like that on Angel, but this transition in particular was especially jarring. So much so that it had me rolling in laughter when I stopped to think about the sequence of events that led to this demon’s death. I recognize that this is probably something you’d have to watch yourselves to truly understand, but by the end of it I promise you the phrase “Finger food?” will be echoing in your mind for weeks to come.