Recently finished Marvel’s Jessica Jones, a series that can be best described as a stylish neo-noire with a compelling hero and an even better villain. Played by David Tennant, Kilgrave is without question the greatest villain in the Marvel Cinematic universe. He doesn’t want to control the world, or the city, or even a small building, his sights are laser focused on one Jessica Jones, and with the horrifying power of mind control (taken to its logical extreme in the show), this threat proves to be more engaging to the audience than anything Marvel has thrown at a hero before. To honour him, here are 5 of Kilgrave’s greatest moments from the series.

Probably the biggest downer ending of the first half of the season was something as mundane as this. Kilgrave isn’t near Jessica and can’t control her with his powers anymore, but he can still make her do things she doesn’t want to do regardless. He demands that she text him a picture of herself everyday or bad things will happen to the people she cares about. It’s just creepy and realistic enough to send viewers on edge, but the worst part of it is the first pic Jessica sends him. She isn’t smiling or giving him the finger in rage, it’s just this blank and defeated look that evokes pure despair on her part. The slimy grin Kilgrave gets after seeing it is enough to make you wanna punch him in the face, and I love it. The show introduces Kilgrave as a larger than life monster, because that’s how victims of abuse see their past abusers. Kilgrave ruined Jessica’s life before, so of course she’d see his return as the re-emergence of this great evil, but the reality is that Kilgrave is just a degenerate with extraordinary powers. He comes off here as a petty stalker that doesn’t know the meaning of the word “no” because that’s exactly what he is. 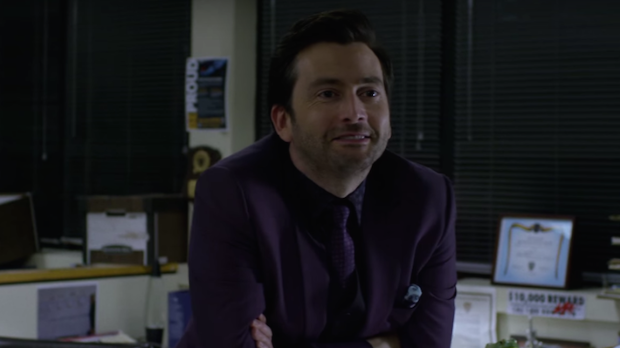 Three little words that mean something completely different to every person you ask. Kilgrave’s definition of love is wanting something he can’t have, and in that sense, of course Jessica would be his ideal woman. He tries to build on them being matched through their respective superpowers, but his “love” for Jessica is really just a distillation of one of the oldest male instincts out there. He wants what he can’t have, and he’ll go to any lengths to get it, even if that means controlling an entire police station and forcing them into elaborate and deadly positions (where many of the victims have guns trained on each other). However, even that horrifying portrait isn’t as frightening as Kilgrave declaring that he is in fact in love with Jessica Jones and that all of the twisted and evil things he’s done to her recently have been in an attempt to court her.

Kilgrave is a lot of things, but he isn’t an idiot. He’s cruel, sadistic, and conniving sure, but he’s not a moron. The elaborate plan he had to use the one person besides her sister that Jessica would trust to lead her into a trap was brilliant. The whole season, the viewer was made to dread the prospect that Kilgrave may have gotten into Jessica’s inner circle of friends and controlled one of them, but it made it no less painful to find out that the entire time she’s been tracking Kilgrave with Luke, that Luke’s been under Kilgrave’s control. Not only that, but every sweet word of kindness and forgiveness he sends Jessica’s way was part of a deranged script that Kilgrave himself wrote. He puts it best when he loudly declares:

“Every move he made was mine.
Those tender moments.
Those sweet things he shared, it was all me.
It was our sexual tension.
It was all me!”

It also helps that Tennant kills this scene with his delivery, especially when he boyishly declares “I wrote it!” in response to her confusion towards how he knew the things Luke said to her in private. Everything about this reveal and this moment was just superbly handled. This entire scene just drips with pure malice. It’s just Kilgrave briefly talking to himself outside, about how much he would like to control Jessica again. The look on her face, the despair, her suffering, her entire being… he wants to possess all of it and either let her wither away or kill her outright. It’s moments like these when I can see that perhaps the feelings he had for Jessica truly were love, because only someone who has felt love could have it corrupted into something as malicious as this little rant. Even his face was twisted up in a hateful sneer. He’s gone through his entire life as a handsome, white, British man who can also mind control anyone he comes in contact with (if one were inclined, you could read his powers as a metaphor for privilege), so of course he’d be repulsed and fascinated by things he can’t have, but this short scene of him just laying it out there, revealing what a monster he is, was just delicious.

1. What Would Jessica Do?

“AKA WWJD” was by far the best episode in the series. It followed Jessica seemingly succumbing to Kilgrave and joining him to live out their days at her childhood home. It’s appropriately creepy, but it also gives great insight into both these characters’ minds as they converse with one another throughout the day. Kilgrave reveals himself to be a doomed person, one that was destined to fail as a human being the second he got his powers. He can’t tell the difference between rape and consensual sex, he can’t even come to the conclusion that murdering is wrong on his own; he just takes what he wants because he has absolutely no sense of right and wrong. Worse, he refuses to acknowledge any wrong-doing on his part, shifting the blame to his victims and using tiny details as a basis to win arguments with. He’s pretty much the worst and was always destined to be, but this episode asks a very intriguing question: What if he could be a hero? When Jessica convinces him to team up with her to stop a hostage situation, this series shoots way into the stratosphere. I would argue that this sequence represents the highest highs of the entirety of the MCU, it is just that good. The banter, the acting, the use of powers, it was all just so perfect, and you would never have seen it coming. Jessica Jones and Kilgrave working together to save a family? I just could not believe it, and the most intriguing part is how that would have been such a compelling premise for a show on its own. Jessica touring the country with Kilgrave, going where they’re needed to save the day, with Kilgrave slowly learning through her guidance to be a good person on his own would have made for an incredible watch, but it would have betrayed what the show was about so they did not go that route, but still. We were given one tantalizing glimpse into the greatest dynamic in the MCU, and I’m more than satisfied with that. The pairing of Jessica and Kilgrave was always going to be great, I just didn’t know in what ways it’d be.

(Honourable mention goes to Kilgrave calling in to Trish’s radio show when she was on the air badmouthing him. His thinly veiled threat and the way he delivers it with barely restrained contempt was probably the scariest moment in the entire show for me.)

“You have no idea, do you? I have to painstakingly choose every word I say. I once told a man to go screw himself. Can you even imagine?”