So The Force Awakens came out and it basically took over the world, so everyone who writes on the internet basically has to discuss it. I do wanna talk about it eventually, but first I think I need to go over my thoughts on the other Star Wars films, minus episodes I and II, because no thanks. Having recently rewatched these films on the road to seeing The Force Awakens they’re still fresh in my head, so the time to search my feelings on them is now.

Revenge of the Sith

What can I say about this movie? Half the people who’ve seen it absolutely hate it, and the other half swear by it as a pretty good film, and if I were to be honest, I would put myself in the latter camp. I watched it before when I was younger, and I remember really liking it, and a upon a second viewing I found there was even more to appreciate, however the flaws were far more significant than I remembered. The fall of Anakin happens far too quickly, the Padme scenes were cheesy as hell, and Palpatine during the second half of the film basically becomes a complete joke. He screams and yells and cheers like a crazed old man off his meds, completely diverging from his characterization as a measured and devious plotter just prior to his turn. Also, the fanservice was way over the top. Why did Chewbacca have to be in this film? Why did Yoda engage in an “epic” duel with Palpatine? Why was Yoda fighting at all? The parts that bothered me the most though, were things involving General Grievous, who I found to be incredibly well designed, but unfortunately, an ineffective villain who didn’t seem very capable and did nothing to help the hokey opening the movie had. The fact that so much emphasis was placed on his capture, but so little about him was shown seriously irked me. Just wasted potential all around.

What did this film do well though? Dread. This movie was very good at giving the audience a sense that everything was going to hell very soon. Of course, everyone watching knows Anakin was going to fall to the dark side by the end, but there was an eerie sense that despair was just around the corner for our heroes throughout. Even as everything was coming together in the war against the droids, it still felt like the world was falling apart for the characters in the film. The scenes between Anakin and Palpatine during the first half were fantastic, with Ian McDiarmid’s Palpatine and his palpable evil being so much fun to watch specifically. The opera scene in particular was a highlight for me (though I still have no idea what the hell they were watching there). I also appreciated how they showed the flaws of the Jedi. While the movie didn’t show a growing anti-Jedi sentiment among the populace (which they really should have), it did show the flawed and hypocritical thinking of the Jedi themselves. They’re portrayed as duplicitous and unable to see the irony of their own actions, obsessed with protecting the people from tyranny while suggesting they themselves should take full control of the government. It’s clear that the movie recognizes that the light side and the dark side doesn’t have to be just good and evil, but rather a difference in perspective. In terms of acting, Hayden Christensen is once again a weak link, but Ewan McGregor’s Obi-Wan Kenobi continues to be a high point in the prequel trilogy. Finally, the music was phenomenal, perhaps the best in the entire series (besides Return of the Jedi of course), and the final fight, while a bit too “Cirque du Soleil” for my tastes, was suitably dramatic. All and all, I’d say it was a good film worth viewing even if it isn’t as good as any of the films in the original trilogy. I recognize the movie, and the prequel trilogy in general had a ton of issues on the road to getting Anakin to donning that iconic mask, but I still got chills when he took his first breath as Darth Vader.

This was your quintessential adventure flick told in space, but watching it directly after the finale of the prequel trilogy really highlights some of its strengths to me. The banter between the characters, the faster pacing, and the sense of fun that were sorely missing are found here. Sure, the movie shows its age with some cheesy dialogue and oddly acted scenes, but the music, the visuals, and even some of the action holds up to this day. This was a movie that took its time to get to the good stuff, but when it did, it was really something special. James Earl Jones’ Vader was also a lot more excitable than I remembered him to be, angrily barking out orders and expressing emotional responses to many of the film’s events. He seemed… enthused… which is ironic considering so many of his rip-offs are emotionless and smug drones.

The Empire Strikes Back

Widely considered by fans and critics to be the best of the trilogy, this movie gripped me from beginning to end. People aren’t wrong about this one, this really is the best Star Wars movie, and that’s because it did what all good sequels should. It built on the character dynamics established in the previous movie, expanded the world, and grew some serious ambition. It also features the most famous twist in cinematic history, and ya, it kind of holds up to this day. Darth Vader being Luke’s father is just perfect, it makes sense on a thematic level, and it’s a genuinely exciting development.

The other aspects of the movie, like the action, improved tremendously, and the introduction of Yoda to the universe shed some much needed light on the Jedi. Yoda was wise, but his ideology was a lot more rigid than I remembered it to be. There’s a point in the film where he advises Luke against leaving to save his friends, and he even goes as far as to say that their deaths would be an acceptable loss if it were for a good cause. That goes against basically every rule of being a good guy in most pieces of fiction, because friendship is the greatest power of all right? According to Yoda this isn’t the case, to him personal growth and a big picture sort of thinking is preferable, which suggests all sorts of things about the nature of the Jedi. We see Vader trying to bring Luke over to his side in this film, and the way Yoda reacted to Luke’s need to protect his friends gives me the impression that Vader’s turn could have been partially motivated by this rigid ideology. Ignoring the events of the prequel trilogy, one could interpret Vader’s fall as being caused by a need to attain short sighted goals as apposed to utilitarian reasoned ones, hell Yoda implies that the former is part of what leads to the dark side. I’m rambling here, but I think you get the point, this film was fantastic.

Return of the Jedi 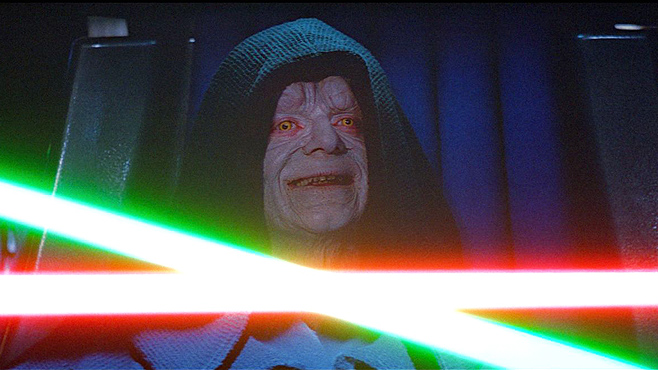 I severely underestimated this film, and I found out that this was an absolutely a fantastic way to end the trilogy. Oh, all the criticisms for this one are mostly on the mark: The Jabba section is too long, Ewoks are stupid, and having another Death Star seems like a retread. However, the stuff in this movie that works, really works. This movie easily has the highest highs in the series, and that’s mainly because of the plot between Luke, Vader, and the Emperor. The Emperor in particular was such a great surprise, I never expected a villain of his type to have the presence that he did, but by God did he do it. He’s just the “bigger bad” done to create a common enemy for Luke and eventually Vader, but the way he was foreshadowed in previous films (and his cameo in The Empire Strikes Back) helped build his mystique. Ian McDiarmid is clearly having so much fun playing this evil bastard, and he easily accomplishes the lofty task of appearing far more threatening and sinister than even Vader. He just does so much with his screen time, easily selling the notion that he’s the galaxy’s grand puppet master, revealing how foolish everyone was for underestimating him with his own dastardly strategies. The hopeless situation he set up against our heroes created a tense and hopeless atmosphere, even if it was eventually undone by a bunch of forest teddies.

But the heart of this movie is with Vader and Luke’s final confrontation. As lengthy as the Jabba section was in the film, it was a showcase in how much Luke has changed since the first movie, and how dark he seems to be becoming. The dark clothes and his willingness to mind control or choke anyone in his way suggested that he is more susceptible to falling to the dark side than one might assume, but of course he overcomes it in the end. Still, it was very satisfying to watch, and it seems as though people aren’t giving Luke as much credit as he deserves as a hero. Yes, he’s mostly the basic “Heroes Journey” protagonist, but he’s also the one that managed to find a way to defy his own mentors and forge his own path. I was very surprised by Obi-Wan’s reaction to Luke’s desire not to kill his father, with him basically saying that the galaxy would be “doomed” if he didn’t. I grew up thinking that converting Vader in the end was the pre-set path that he was supposed to take, but it really wasn’t, and everything surrounding it was surprisingly moving. Even though you couldn’t see Vader’s face, you could feel the turmoil he was experiencing as his son was being shocked to death by the Emperor, and Vader’s ultimate decision to throw his master into the Death Star’s reactor was cathartic. I’m probably never going to forget his death scene, with Vader finally being unmasked as Anakin and his theme song playing in the background in a gentle reprise (did I mention the music in this film was incredible?). Like I said, the highest highs.

So those were my thoughts on the Star Wars movies, if I were to rank them I’d go V>VI>IV>III. I will be posting my thoughts on The Force Awakens later, but if later is “now” for those reading, click here to see them.

One thought on “Star Wars Retrospective: From Revenge of the Sith to Return of the Jedi”