Kate McKinnon and Melissa McCarthy on the set of ‘Ghostbusters’. Proudly using this picture for my article instead of those GOD AWFUL photoshopped images of the stars heads on the original Ghostbuster bodies. Seriously those are disgusting, and they’re in like, every article about this. I mean come on.

Surely you’ve all heard of the Ghostbusters reboot starring Kristen Wiig, Melissa McCarthy, Kate McKinnon, and Leslie Jones being developed by Sony by now, and if you have, you probably have been exposed to (or are a source of) the vitriol that’s been spewed in response. People hate this movie, and this isn’t some basic contempt, this is pure unfiltered malice. Passionate rage in response to what they undoubtedly interpret as some sort of personal affront. In other words, people already hate this movie like I hated the series finale of How I Met Your Mother. It’s that bad, and the movie isn’t even out yet, but it’s clear why. You all know what’s really behind all of this hatred, this irrational rush to judgement that’s happened in response to an all-female Ghostbusters movie. All these guys on the internet are letting their primal fear show, their unfair prejudice towards something that is all around them every day; I am talking of course about the fear of reboots.

People cannot stand reboots of things they liked as kids. It’s a fact of life, but not a lot of things are as culturally significant and as good as the original Ghostbusters was. There are some people who would go as far as to say there is no such thing as a good reboot/remake (despite the existence of Scarface, The Thing, True Grit, 3:10 to Yuma, The Fly, Dawn of The Dead, Oceans Eleven, The Departed, Girl With The Dragon Tattoo, Insomnia, The Karate Kid, Little Shop of Horrors, Invasion of the Body Snatchers, Fistfull of Dollars, Magnificent Seven, and Cape Fear). There’s a negative attitude associated with reboots due to a lack of original content in Hollywood (and the amount of reboots that due turn out to be sub par), but a lot of that is all grounded in misdirected rage. There’s nothing wrong with a reboot if it is done well. Revisiting old material in a fresh way illustrates the changes in attitudes society has made going forward. There is a lot of recycled schlock in Hollywood, but after 3 decades and with it being entrusted to these people, this reboot in particular should not be counted among them. The thing that baffles me most about the backlash this project is facing is the fact that there are some genuinely talented people behind it that have proven themselves time and time again.

Paul Feig knows what he’s doing. He created the beloved cult-classic Freaks and Geeks, and has recently been popping out numerous hit films both from behind the camera and in the writing room. His most recent effort as writer/director, Spy, was hilarious and well loved by critics (and more importantly, by me). It also showcased Melissa McCarthy’s talent and range as a comedic actress. If you are part of the crowd that assumes she’ll just yell and fall down a lot in every movie she’s in, then you really need to see Spy. As for the actors, there’s nothing to be so apprehensive about either. The McCarthy hatred is ridiculous and will seem that way to anyone who knows how gifted a comedic actress she is from seeing her work on SNL and her good films. Kristen Wiig is pretty much an SNL legend at this point, and Kate McKinnon is quickly on her way to becoming one. As a whole, the cast displays a lot of promise, and the script is good enough for one of the original Ghostbusters writers and actor Dan Aykroyd to praise it as “funny”, “intelligent”, and full of “friction”. Rounding back to the premise of the article, why expect it to be terrible when nearly everything going into it is indicative of its quality? 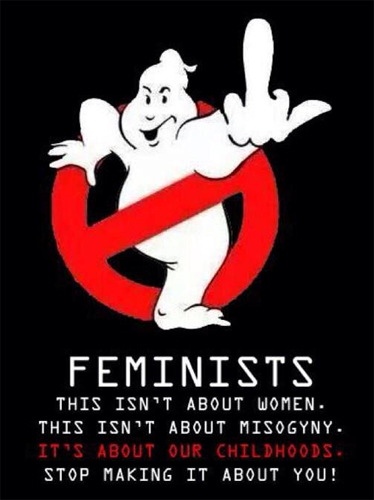 Time to address the elephant in the room. I dodged it before, but we’re going to have to talk about it now. The all female cast of this film is definitely a factor in why people are so against it. You can pretend it doesn’t bother people all you want, but it’s time to face facts, guys like the ones who created the image posted above are everywhere and you know it. People either view the all-female cast as a cheap gimmick, or are annoyed by it due to good-old-fashioned sexism; often a little of both. These fears are irrational in the same way fears of reboots are irrational. If the project is in good hands, why sweat the details? If they’re going to make a reboot, why not change the dynamic in a big way to further justify it? We live in a society that is only now seriously examining how society should view women in Hollywood, so in a way this is actually fitting. The fact that there are already rumours about another Ghostbusters film starring an all male cast in the works though, is indicative of something pretty vile. A rush to “normalcy”, a desire to not shake up the status quo and going to everyone’s comfort zone is what is at play here. Just like your average college-aged Bernie Sanders supporter, it seems that executives are running to what feels safe because they’re afraid of trying something that could change their perspective. So many people have already decided that they hate this movie, and I know they will try very hard to continue hating it when the time comes for its release. The same way you can’t say this movie will surely suck, I can’t tell you that this movie is definitely going to be good (because every good movie is its own little miracle), but I can say that everything that we know about it so far suggests that it will be exceptional. These Ghostbusters have no dicks, but just like Walter Peck, that doesn’t mean we shouldn’t hear them out.

Hilary Clinton (as portrayed by Kate McKinnon): “Citizens, you will elect me. I will be your leader.”

Note: I have no issue with Bernie Sanders or his politics, I just know where many of his younger supporters are coming from with their sudden love for him.